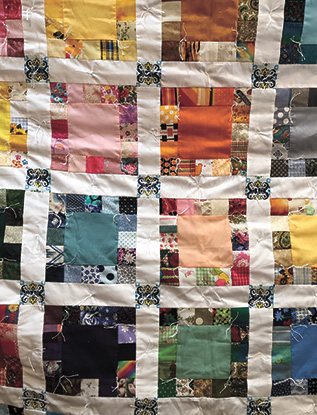 E. Faye Berger, 89, Traer, Iowa, passed away Saturday, April 4, 2020, at ther home in Traer. Services are planned for a later date. Burial will be at Buckingham Cemetery. Condolences may be left at www.overtonfuneralhomes.com. Overton Funeral Home in Traer was entrusted with the arrangements.

E. Faye Berger was born on October 20, 1930, in Marshalltown, the daughter of Clark and Mabel (Downs) Harrah. She graduated from Montour High School in 1948. Faye was united in marriage to Marion Berger on July 13, 1948, and they worked on a farm in Gilman for 10 years. In 1951, they rented a farm near Montour. In 1961, they bought a farm near Traer and moved to town in 1988. Faye served on several committees and taught Sunday School. She loved fishing, sewing, especially quilting, and playing cards. On April 4, 2020, Faye died at the age of 89 at her home. She was preceded in death by her parents; her husband of 71 years; two brothers, Skip and Lloyd; and a sister, Margaret. Faye is survived by two sons, Calvin Berger and Denny (Jill) Berger; a daughter, Chris (Roger) Tucker; a sister, Flora Lou Finley; two grandchildren, Melinda (Trevor) Oberholtz and Scott (Alana) Berger; and four great grandchildren, Alora, Alec, Reis, and Jaide. In lieu of flowers, please direct memorials to the family.