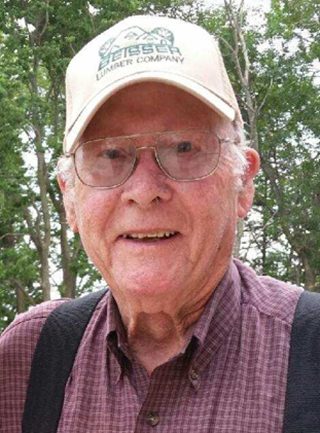 Leonard Roy Ruzicka, 89, of Traer, passed away Sunday, April 19, 2020 at MercyOne Waterloo Medical Center. Family Graveside Services will be held at Buckingham Cemetery in Traer with Pastor Martha Bennett officiating. There will be a Celebration of Life at a future date. Please feel free to leave condolences to the family at www.kruse-phillips.com.

Leonard was born on July 23, 1930 on a farm northwest of Traer, the son of Rudolph and Celia (Hledik) Ruzicka.

Leonard joined the Army on November 30, 1951 serving in the Army Anti-Aircraft Artillery, spending a year training and then a year in Germany, ending his career on November 20, 1953.

Leonard married Marjorie Dostal on January 12, 1954 at The Traer United Methodist Church. They were married for 60 years.

After military service Leonard worked for Kenny Smith in the home building trade. He later became co-owner of Traer Cabinet & Construction Co. where he worked until retiring.

Over the years, Leonard spent many hours gardening, camping with friends and family, shooting trap and skeet, and doing woodworking projects to give away. They also enjoyed traveling the United States and a trip to the Czech Republic in 1996, but especially enjoyed fishing and time spent with family and friends at the lake cabin he and Marge had in Minnesota.

Leonard was preceded in death by his wife Marjorie on February 28, 2014, his parents, brother-in-law Lawrence Wrage & a nephew.

In lieu of flowers, memorials may be directed to the Traer United Methodist Church or the American Legion Post 142 in Traer.

Kruse-Phillips Funeral Home, Tama-Toledo, is assisting the family with arrangements.